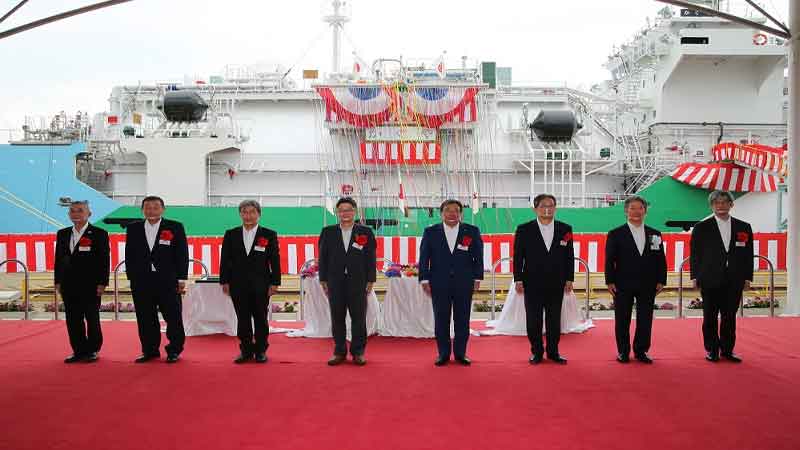 A naming ceremony was held at the Sakaide Works of Kawasaki Heavy Industries, Ltd. for Japan’s first LNG bunkering vessel.

The ceremony was attended by Masashi Asakura, Chief Officer for Production Group of Toyota Motor Corporation; Masahiro Kato, Deputy Director-General for Engineering Affairs, Ports and Harbors Bureau of Japan’s Ministry of Land, Infrastructure, Transport and Tourism; and a number of related parties.

LBV's name, Kaguya, derives from Princess Kaguya in "The Tale of the Bamboo Cutter," which is said to be Japan's oldest story and is still loved by many people today. The name also expresses our desire to grow the LNG bunkering market as long and high as a bamboo tree.

Kaguya is the first LNG bunkering vessel to be operated in Japan. Kaguya will be operated by Central LNG Marine Fuel Japan Corporation and will be based at JERA's Kawagoe Thermal Power Station. Kaguya will begin supplying LNG fuel to ships in the Chubu region in October or later this year using Ship-to-Ship bunkering.

The International Maritime Organization (IMO) has agreed on a goal to reduce GHG emissions from shipping by at least 50 percent by 2050 compared to 2008, and the delivery of LNG-fueled ships is expected in the future. After the start of operation, Kaguya will supply LNG to Sakura Leader, which is the first large LNG-fueled PCTC (pure car and truck carrier) operated by NYK, and to a new car carrier to be delivered by K-Line this fiscal year, as well as to other LNG-fueled vessels.

The expertise and strengths of each company — including K-Line's technological expertise accumulated through its long-term LNG carrier operations, JERA's operational and technical capabilities at its large-scale terminals, Toyota Tsusho's global sales network for marine fuel, and NYK's experience in the world's first LNG fuel supply and sales business — will be utilized to provide LNG bunkering in Japan’s Chubu region and expand our marketing services to promote the use of LNG as a fuel for ships, thereby contributing to a reduction of our environmental impact.