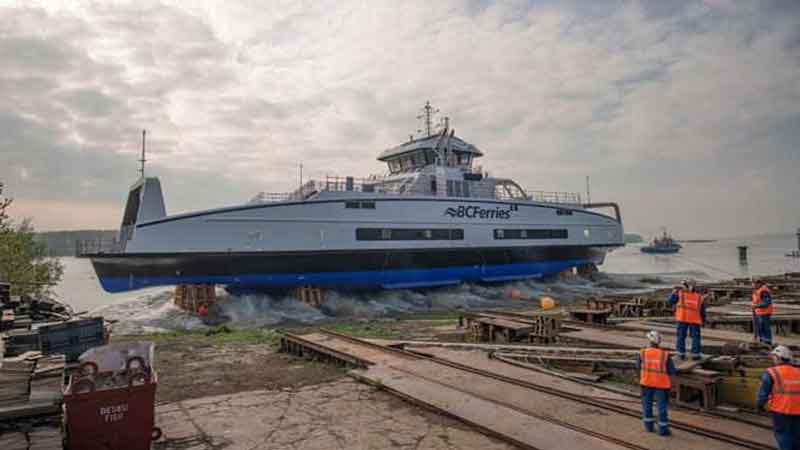 Damen Shipyards Galati successfully launched the third Island Class Vessel for BC Ferries. The vessel is part of an order of six such vessels for the ferry operator and will perform an environmentally efficient inter-island ferry service between Vancouver and Vancouver Island in British Columbia, Canada.

Damen has already delivered the first two vessels to BC Ferries in February this year. The Island Discovery and Island Aurora have been providing a service along the British Columbian coast since June this year.

The Island Class vessels are Damen Road Ferries 8117 E3; the E3 standing for environmentally friendly, efficient in operation and economically viable. The vessels’ hybrid fuel arrangement assists BC Ferries in its goal of improving environmental performance, with a view to evolving towards full electric propulsion in the future. The ferry can carry up to 300 passengers and at least 47 cars.

Due to the ongoing coronavirus pandemic, to ensure the safety and wellbeing of attendees, the launching ceremony was a digital one. Delegates from Canada, Romania and the Netherlands joined the event remotely, including BC Ferries CEO Mark Collins and Damen Shipyards Group Chairman Kommer Damen.

Mr Collins said, “I just want to say thank you to everyone at Damen Shipyards Galati for the launching of the Island Class phase three. This is the third in our series of six vessels that are bringing clean, green, environmentally sustainable performance to the ferry system of British Columbia. Up and down the coast, the first two ships have been a great success and we look forward to receiving the next four. Thank you to everybody for your role in bringing this tremendous vessel to the people of British Columbia.”

The CMA CGM Group announces the order of 22 new vessels