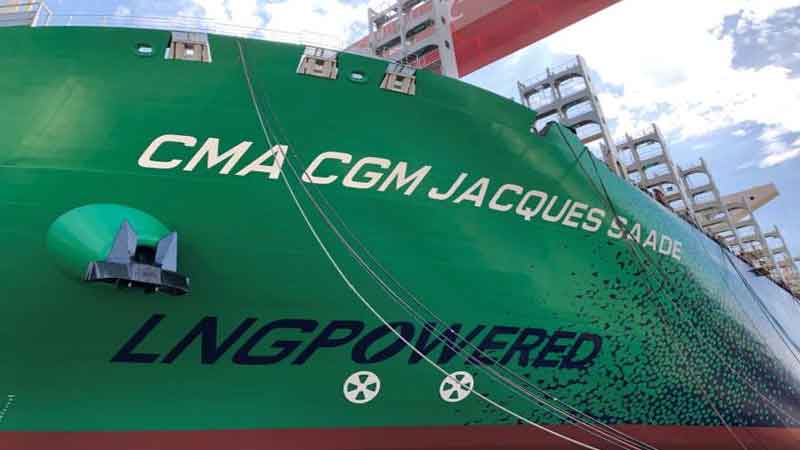 The CMA CGM Group, a leading worldwide shipping and logistics group, is pleased to announce the launching of the world's largest containership (23,000 TEU) powered by liquefied natural gas (LNG).

This major milestone in the construction of the world's first LNG-powered ultra large containership was reached today at the Shanghai Jiangnan-Changxing Shipyard, at an event attended by Rodolphe Saadé, Chairman and Chief Executive Officer of the CMA CGM Group, French and Chinese officials, business leaders and CMA CGM Group customers.

In 2017, Rodolphe Saadé announced his decision to order a series of nine 23,000-TEU containerships that would be the world’s first ever to be powered by liquefied natural gas. Through this strategic choice, the CMA CGM Group reaffirmed its assertive commitment to safeguarding the environment and leading the industry’s energy transition.

-  emissions of sulphur oxides and fine particles by 99%

-  nitrogen oxides emissions by up to 85%

-  carbon dioxide emissions by around 20%

These new vessels will join the Group's fleet in 2020 on the French Asia Line (Asia-Northern Europe) and will be registered in the French International Register (RIF), confirming the Group's commitment to operating under the French flag.

In addition, the nine newbuilds will feature a state-of-the-art bridge design, the world’s first to deliver four major innovations to assist the Captain and crew:

-  a smart eye system projecting a bird’s-eye view of the ship’s surrounding area augmented reality screens offering the crew precise information on the ship's rate of rotation, distance from the wharf and transverse speeds.

The first vessel in this new class of 23,000-TEU LNG-powered containerships, the CMA CGM JACQUES SAADE will also be equipped with a smart system to manage ventilation for the reefer containers carried in the hold.

To further improve the environmental performance of the CMA CGM JACQUES SAADE and her sisterships, their hull forms have been hydrodynamically optimised. The bulb has been seamlessly integrated into the hull profile and the bow is straight. The propeller and rudder blade have also been improved, along with the Becker Twisted Fin®.

The exceptionally large vessels (400 metres long and 61 metres wide) will be distinguished from the rest of the fleet by a special livery proudly displaying an “LNG POWERED” logo, attesting to the major worldwide innovation that LNG propulsion represents on ships of this size.

An outstanding tribute to Jacques Saadé, Founder of the CMA CGM Group

By naming the world's first LNG-powered, 23,000-TEU container ship CMA CGM JACQUES SAADE, the Group has symbolically given the name of its Founder to its future flagship. A visionary entrepreneur, Jacques Saadé built CMA CGM into one of the world’s leading maritime shipping companies, while maintaining its family dimension and strong values. In this way, he left a lasting mark on the entire shipping industry.

During the launch event, Rodolphe Saadé, Chairman and Chief Executive Officer of the CMA CGM Group, said: “With the launching of the first 23,000-TEU ship powered by Liquified Natural Gas, we demonstrate that energy transition can be effectively successful in our industry if all the players work together. It paves the way to a global shipping approach where economic growth and competitiveness can coexist with sustainability and the fight against climate change.”